Google is changing its default settings to automatically delete some of the data it collects about users.

Web and app activity, including a log of website searches and pages visited, as well as location data, will now be wiped after 18 months.

YouTube histories – including which clips were watched and for how long – will be erased after 36 months. 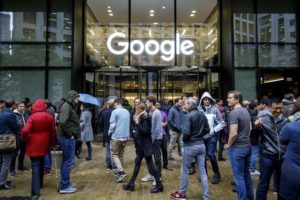 The changes apply to new accounts only but existing users will soon be shown new prompts to adjust their settings.

The Wall Street Journal has reported the US Department of Justice is to meet with state attorneys general later this week to discuss plans to punish Google for anti-competitive behaviour, including an allegation it has abused its dominance in online search.

And, on Tuesday, a German court imposed curbs on the data Facebook collects about local users, over concerns it has been abusing its market-leading position among social networks.

Google introduced auto-delete controls in May 2019, to let users force the regular erasure of logs gathered about them by the company, but made this an opt-in option at the time.

The US technology company draws on this information to produce personalised recommendations and search results, as well as to target ads.

“But data minimisation is one of our important privacy principles [and] Google will no longer keep activity indefinitely unless you ask us to.”

Google said it wanted to hold on to YouTube records for longer than other internet activities, as this would help it do things such as make music recommendations, for which a longer search history was beneficial.

And it added the auto-wipe policy would not apply to logs linked to Photos, Gmail and its Drive cloud-storage facility, which it said it did not draw on for advertising purposes.

The company has justified its decision not to apply the change to existing accounts on the basis it does not want to catch people out by wiping “curated” data without their express permission.

And it noted all users could choose to set the auto-wipe period to as little as three months.

However, it does mean the change will affect far fewer people than it might have.

Long-time users will be affected by other measures, though, including being shown new “guided tips” .

For example, if someone uses Google Search to ask if their account is secure, a box will appear showing their settings and providing a way to adjust them.

In addition, other related “dynamic cards” should be introduced shortly.

In one instance, if a user opts to share their handset’s location with a friend, they will later be reminded the permission is still active and asked if they want to turn it off.

Google said it had also made it “easier to access” Incognito Mode in its apps – a setting that suspends data-logging – by letting users turn on the facility by pressing and holding their profile picture.

“Many people are uncomfortable with the amount of information Google keeps,” said Jim Killock, executive director of the Open Rights Group.

“Prompts could mean a range of things people do their best to ignore.

“Google should ensure that everyone has made a clear indication about whether they want their histories stored and for how long, rather than whether they have swiped away some notice they half read.”