Sadio Mane scored as Senegal beat nine-man Cape Verde 2-0 in the last 16 at the Africa Cup of Nations, but was immediately forced off with concussion.

Mane curled in off the underside of the crossbar soon after keeper Vozinha had been dismissed over a nasty clash of heads with the Liverpool forward.

Mane continued despite appearing to be briefly knocked out in the incident.

After celebrating his goal he lay down on halfway, and before the game restarted he was led off the field.

The match in Bafoussam was preceded by a minute’s silence for the victims of the crush at the Olembe Stadium on Monday.

Senegal will face either Mali or Equatorial Guinea in the last eight on Sunday.

Concern for Mane after clash

Tournament organisers the Confederation of African Football may have questions to answer about their concussion protocols after Vozinha and Liverpool striker Mane were both floored in the 53rd minute.

The Cape Verde keeper rushed out of his box in an attempt to intercept a long kick downfield by Senegal keeper Edouard Mendy, and collided head-first at pace with Mane, who had got to the ball first and headed forward.

After a lengthy stoppage a clearly groggy Vozinha was about to be substituted but, following a video assistant referee review, deserved to receive Cape Verde’s second red card for his reckless challenge.

Somehow Mane was deemed fit to continue and, after having a shot saved by substitute keeper Marcio Rosa, the forward then broke the deadlock from the resulting corner.

“He felt faint, his head was spinning and he had to go there,” said Cisse.

Mane later posted a picture from his hospital bed of himself and Vozinha on his Instagram account, adding that everything was well. 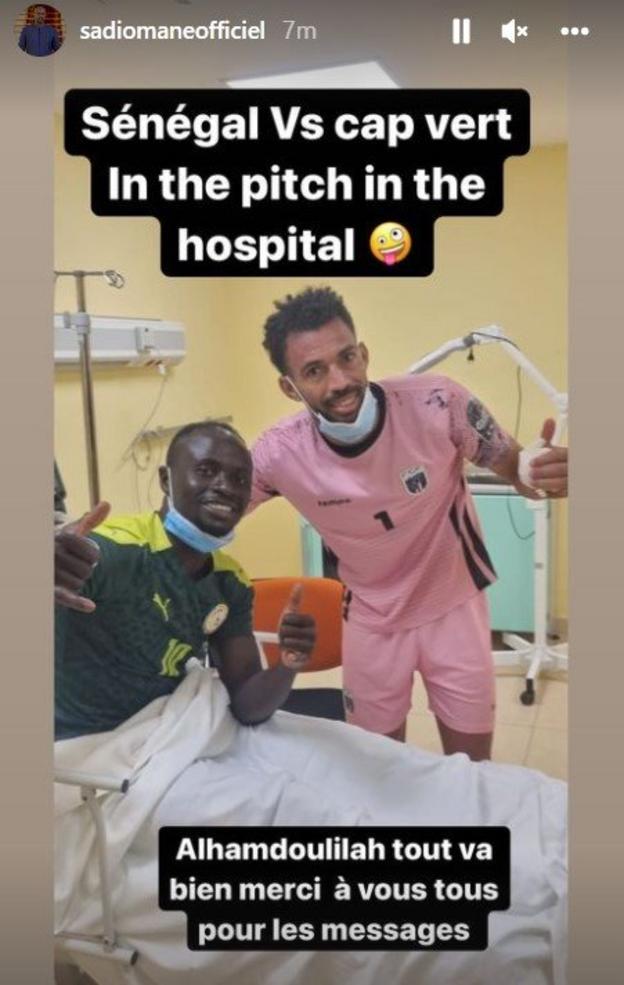 Mane’s head clash was really uncomfortable to watch. It was clear that the Liverpool forward was knocked out as he fell and hit his head again on the turf – he looked like a defeated boxer.

Meanwhile, the Cape Verde keeper couldn’t walk straight before being ushered away by his team-mates following his red card.

But it’s the aftermath that raises questions. Why wasn’t Mane substituted straight away?

Yes, he scored not long after the collision but the decision not to take him off looked even more unwise when he laid down on the pitch following his goal and clearly looked in distress, before eventually being replaced.

It wasn’t a good look and you just hope Mane is OK.

Senegal had topped their group despite scoring once in just three matches, and spurned several more chances in front of goal.

Mane hit the right-hand upright in the first minute, and the Teranga Lions had a man advantage 20 minutes later when Andrade was dismissed following a VAR consultation.

He had caught Pape Gueye on the top of the ankle with his studs and his initial yellow was upgraded to red, meaning all five last-16 ties at the tournament have had at least one sending-off.

Two men down, Cape Verde had few forays forward and Julio Tavares had their best chance with five minutes left but tamely flicked a cross straight at Mendy.

Dieng, who had earlier sent two attempts wide, wrapped up the game from a counter-attack as the islanders pushed for a late equaliser.

Senegal were runners-up in 2019 and remain among the favourites to win the Nations Cup, but coach Aliou Cisse will need further improvements in the final third if the West Africans are to lift the trophy for the first time.