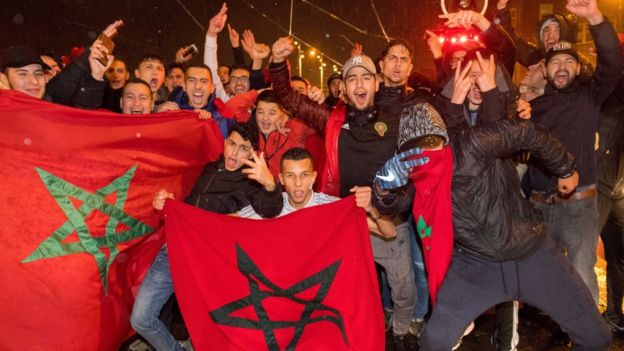 Morocco Atlas Lions Football team are through to the FIFA World Cup semi-finals, becoming the first African And Arab football team at this advanced stage, after a battling 1-0 win over Portugal.

Morocco will become the first African and Arab football team to compete in the FIFA World Cup™ semi-finals after a courageous, backs-to-the-wall 1-0 victory over Portugal at Al Thumama Stadium.

Youssef En-Nesyri was the hero for the injury-hit Atlas Lions with a superb first-half header that continued the team’s fairy tale run at Qatar 2022.

The Moroccans were always going to be overwhelming outsiders against the star-studded Seleção das Quinas, and their odds lengthened yet further ahead of kick-off with the news that key defenders Nayef Aguerd and Noussair Mazraoui had both been ruled out with injury.

Worse still, wounded warrior Romain Saiss – another stalwart at the back – attempted to play but was eventually forced off in tears early in the second half, clutching his heavily strapped hamstring. But although that left the Moroccans holding on against their heavyweight European rivals, hold on they did.

Portugal had their moments either side of half-time, with Bruno Fernades rattling the bar, Yassine Bounou producing some superb saves to deny Joao Felix, and Pepe heading wide in stoppage time when it seemed easier to scorer.

But the Atlas Lions could also have scored more than that solitary, all-important El-Nesyri header, and no-one can question that this team – fresh from boosting their tournament-leading defensive record with yet another clean sheet – are well worth their place in the last four.

There will be better goals scored at this World Cup than En-Nesyri’s. It is unlikely, however, that there will be one scored from a mightier leap – one that Cristiano Ronaldo, benched again, would undoubtedly have been proud of – than that produced by the Morocco striker.

Diogo Costa will not want to watch it back, having made an ill-advised rush from goal in a vain attempt to reach a long, speculative cross. But all credit goes to the centre-forward for a perfectly timed jump and powerful header that sparked scenes of joy far beyond this rocking stadium.

Morocco had come the the fourth African nation to reach the quarter-finals of the World Cup, following in the footsteps of Cameroon (1990), Senegal (2002) and Ghana (2010). No-one from the Mother Continent, however, had ever made it to the last four – until now!

Player of the match﻿